Minutes of the November Business Meeting

The annual business meeting of the Wisconsin Section of Central States Water Environment Association was called to order by Chair Carol Strackbein at 3:10 p.m. on November 10, 1999 at the Manchester East Hotel in Milwaukee, WI.

Vice Chair Ken Sedmak was absent. 17 members of the Section were present.

CSWEA Trustee Report: Trustee Dan Lynch presented a written report. Items of note were that the CSWEA annual meeting will be held at Pheasant Run Resort and Convention Center from May 16 through 20, 2000. The CSWEA directory will be subdivided by State Section and posted on the CSWEA web page; the date of implementation is as of yet unknown. The Executive Committee voted to discontinue the Lab Practices committee at the CSWEA level. CSWEA funding of ABC certification of laboratory analysts will also be discontinued. A bylaw change will be introduced and voted on at the annual meeting in May 2000.

Treasurer’s Report: Treasurer Tom Sigmund reported that there was a balance in the Section’s accounts of $6,144.61 as of November 8, 1999. Dan Lynch moved that the Treasurer’s report be accepted as presented. Second by Rusty Schroedel. Motion carried.

WWOA Liaison Report: Tom Steinbach presented a written report. Tom was recently appointed by WWOA President Wally Thom to be the WWOA Liaison to the Wisconsin Section, replacing Judy Tholen. The WWOA annual meeting in Stevens Point was well attended and set a record for registrations. A new membership directory was distributed at the conference. A bi-annual dues increase from $24 to $40 was approved.

Chair Carol Strackbein recessed the meeting at 3:20 p.m. for the Committee meetings. The meeting was reconvened at 3:45 p.m.

Collection Systems: Tom Krueger presented a written report prepared by Chair Floyd Finney. The tentative date for the 2000 Collection System Seminar is June 1 in Watertown. That date will be confirmed soon with Paul Lange. A nomination has been submitted for the WEF Golden Manhole award which is to be awarded for furthering education on collection systems with either the public or within facility operations.

Government Affairs: Rusty Schroedel presented a verbal report. Jay Kemp, Bill Desing, and Dan Busch were added as new committee members. The committee is working to revitalize the tracking of codes and regulations.

Groundwater Protection and Toxic Waste: No report was received.

Industrial Waste: Randy Wirtz presented a written report. He continues to add committee members and the committee is working to define a focus for their activities. They are making contacts with industries to identify important issues. The committee will work to develop an ongoing role in CSWEA conferences and may propose a separate industrial waste seminar in the future.

Membership: No report was received.

Operations & Management Seminar: John Olson presented a verbal report. He noted the Wisconsin representatives on the 1999 WEFTEC Operations Challenge. He is working to update the committee membership list in order to get more activity from the committee. He is preparing to submit the Operator of the Year and Hatfield award nominees to CSWEA by the end of December.

Safety: Tom Sigmund presented a written report prepared by Chair Ari Mathos. The committee is working to select a Burke award recipient, set up a safety area on the CSWEA web site, and submit safety articles for publication in the WISILLMINN.

Lab Practices: Tom Sigmund presented a written report prepared by Chair Jeff MacDonald. The report and the discussion that followed was on CSWEA and Wisconsin Section support of the laboratory analysts certification program. It costs CSWEA $600 per year to be able to give the exams and recertification. It was noted that there are a small number of certification exams actually given each year. Analysts can be recertified on their own, but at a higher cost than under the CSWEA umbrella. The committee also nominates someone for the WEF lab analyst award.

Watershed Management: Paul Nehm presented a written report prepared by Chair Mike Doran. A 303d list update will be prepared by DNR for submittal to EPA next year. DNR is in the process of updating NR 104. EPA has drafted revisions to the TMDL rules, with comments due to EPA by 1/22/00. EPA is developing a National Nutrient Strategy with the technical guidance materials complete by 12/2001. Effluent trading is being considered in three pilot programs on the Rock River, Red Cedar River, and Fox-Wolf Basin. EPA Phase II Stormwater Rules are finalized and will be published soon in the Federal Register. A number of Wisconsin communities in metro areas >50,000 population will be impacted.

Water Wastewater Education Association: Rusty Schroedel presented an oral report. The Wisconsin Section needs to appoint another representative to WWEA. Carol Strackbein will follow up to identify a candidate. As usual, dates of wastewater meetings should be sent to Peg O’Donnell for posting on the calendar.

2000 Wisconsin Section Draft Budget: Tom Sigmund presented a draft of the 2000 budget for the Section, and reviewed the status of the 1999 budget versus actual to date. The adoption of a reserve fund was suggested. It was also suggested that some money be included in the 2000 budget for funding our Operations Challenge commitment, if needed. A request was made to the committee chairs to submit their budget requests for 2000 to Tom Sigmund by January 15, 2000. The Board will review and approve the budget at the February Board Meeting.

CSWEA/WEF Awards: John Leonhard encouraged all committee chairs to submit nominations for awards by the end of December so they can be awarded at the May meeting. He noted that WEF has lots of awards and that the Wisconsin Section should submit qualified candidates for consideration.

CSWEA Web Site: Leonhard encouraged the Section to make more use of the CSEWA web site. The Section should post information on upcoming events and meetings. Committees can use this site to publish information of interest to the entire membership. Contact Jeff Mazanec (920-830-6321 or e-mail Jmazanec@OMNNI.com) to get information posted on the web site.

John Leonhard moved that the meeting be adjourned. Second by Rusty Schroedel. Meeting adjourned at 4:50 p.m.

The Winter Board meeting for the Section will be held on Wednesday February 23, 2000 beginning at 2:30 p.m. at the Madison Nine Springs WWTP. 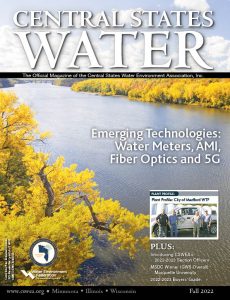